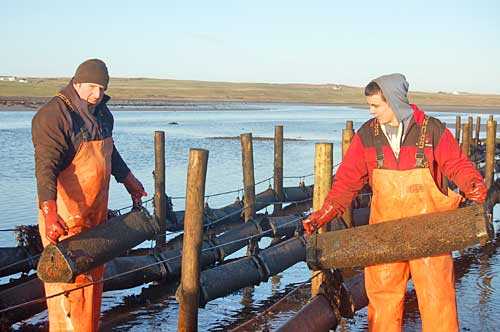 Islay Oysters was founded in 1987 by Tony and Janet Archibald as a farm diversification and is now run by their son Craig, his wife Petra and their three children.

The oysters are grown on the east side of Loch Gruinart, a tidal estuary on the north coast of Islay. The oysters grow well as the waters around Islay are warmed by the Gulf Stream.

Islay also has a mild climate so as the tide races in to the three miles of Loch Gruinart twice daily, it brings fresh feed with it from the Atlantic Ocean the oysters are always sweet and in tip top condition.

The oysters are often enjoyed with a wee dram of whisky poured on top from one of the many local distilleries.

Islay Oysters Opening Hours
Opening times for oysters are Monday – Friday, 1pm – 4pm. We are closed Saturday and Sunday but out of hours appointments can be made by phoning 01496 850 256.

This is a picture of Innes showing the best rock oysters in Scotland awards that we won last year and again this year at the association of Scottish shellfish growers conference that was held In Oban on the 6th -7th October.